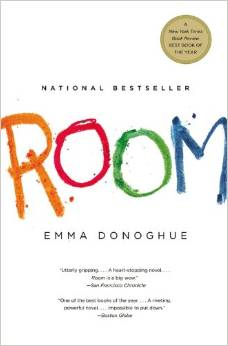 Summary from Amazon:
To five-year-old-Jack, Room is the world. . . . It's where he was born, it's where he and his Ma eat and sleep and play and learn. At night, his Ma shuts him safely in the wardrobe, where he is meant to be asleep when Old Nick visits.
Room is home to Jack, but to Ma it's the prison where she has been held for seven years. Through her fierce love for her son, she has created a life for him in this eleven-by-eleven-foot space. But with Jack's curiosity building alongside her own desperation, she knows that Room cannot contain either much longer.
Room is a tale at once shocking, riveting, exhilarating--a story of unconquerable love in harrowing circumstances, and of the diamond-hard bond between a mother and her child.

It was hard reading at the start due to the voice of the five-year-old narrator.  That took some getting used to.  But by page 50, I was hooked.  I didn’t want to set the book down.  I needed to know what happened.  How Jack & Ma were doing.  What was next.

Donoghue does a fabulous job of drawing you into her characters.  I had visceral emotional responses to them and their situation.  I would find myself praying for Jack throughout the day.  They became real people in my world.
I also appreciated the separation from the horror via seeing it through the eyes of Jack.
Really, I don’t know that I have an criticism for this book.
Posted by becki at 9:32 AM No comments: